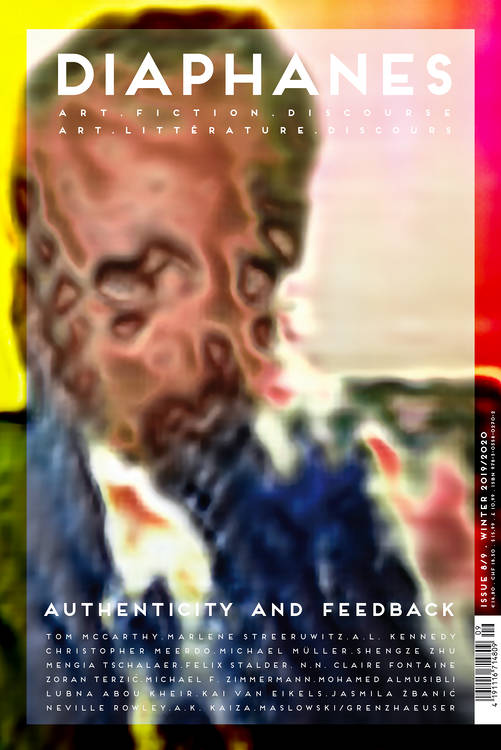 DIAPHANES MAGAZINE No. 8/9
Authenticity and Feedback

DIAPHANES 8/9 looks into curious loops of reproduced present, the integral of circular I-effects, the other side of the social Möbius strip.

Is the self nothing but an echo? An effect without cause? The human being a message, an autoreply in the jargon of social-memes? Who or what massages the backchannel so astoundingly self-similarly, like an invisible hand?

Tom McCarthy makes a plea for the inauthentic, for an ethics without subjects. Shengze Zhu tells of intimacy and loneliness in the livestreaming communities of China, and Zoran Terzić asks about strategies against grand generalization by generic rationality. Christopher Meerdo consigns Bin Laden’s visual digital archive to an artificial intelligence. Mohamed Almusibli dives into the chasm of origin and destiny. Kai van Eikels has his Eribon moment. A.L. Kennedy tells you what an author can do. Marlene Streeruwitz researches instead of building cabins to think in. N.N. assembles diffuse scripts behind a hash function.

This double issue receives fake signals, listens out for the high whistle of analogue resonance, couples the one with the other, and fiddles with the author-function.